Winterwood Farm operates the world’s largest dedicated soft fruit processing facility, handling 20 million kilos of soft fruit each year and distributing 60 million packs to supermarkets. Refrigeration is a major part of their business and the cost of maintenance and gas top-ups were starting to add up.

Refrigeration in the packhouse

“We would have installed the Parasense system even if the F-Gas regulations had not required us to.” – Steve Taylor, MD, Winterwood Farm

When the refrigeration equipment was first installed, a leak detection system had been put in place to monitor just the plant room. However it proved unable to protect them when two very costly gas leaks occurred – ultimately tracked back to fittings in overhead gantries.
The old leak detection system was suffering from reliability problems, including false alarms which meant engineers were being dispatched at all hours, resulting in high call out costs.
The cost of repairs and spare parts for the old leak detection system were mounting so they decided to invest in a more dependable solution. On the basis of many years’ experience, their refrigeration specialists, Freshcold, recommended Parasense.

Parasense supplied and installed a GRM2 infrared refrigerant leak detection system that draws air samples from key points in the plant room and elsewhere throughout the site, including control valves high up on gantries.
To fit around the seven-day-a-week operations at Winterwood Farm, the Parasense team had to plan carefully and follow working practices that were appropriate for the food production environment.

“With the Parasense system we know much earlier when there is a problem” – John Haffenden, MD, Freshcold Refrigeration

By installing a Parasense refrigerant leak detection system, the directors at Winterwood Farm are now confident that no leaks are going undetected, so the previous high costs of R404A top-ups are avoided. Furthermore, they – and their supermarket customers – know they are minimising their greenhouse gas emissions.
At the same time, refrigeration contractor Freshcold is able to pass on the savings from greatly reduced callouts, while giving their client the assurance that their engineers can respond faster to any serious leaks. 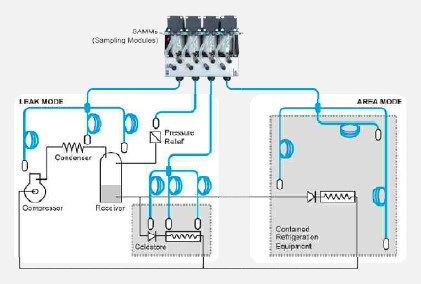